Client from the start: Chemelot Institute for Science and Technology (InSciTe)

Knowledge and valorisation institute Chemelot Institute for Science and Technology (InSciTe) was established in 2014 with the aim of bringing biobased and biomedical innovations to the market or patients more quickly and effectively. To achieve this, the (Bio)medical Accelerator Matrix’s ‘BEAM-NL’ working model was developed for the biomedical branch, supported by the OPZuid program*. Alongside bringing various innovations to clinical trials, the working model itself has now started to be marketed – by Medace. 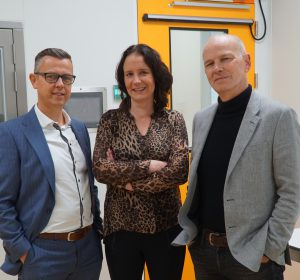 In 2019 InSciTe started the transfer of the Matrix concept to their spin-off Medace. The InSciTe employees who were involved in developing the model (Danielle Curfs and Kurt Gielen) continued as entrepreneurs here. Medace has turned the concept into a business model and as part of that, has designed and built a new biomedical facility in the heart of the medical hub in Maastricht. InSciTe‘s 8 running bio-medical projects and office have moved to this new Medace facility.

Emiel Staring, the managing director of Chemelot InSciTe, is proud that Medace grew out of InSciTe. ‘I’m especially proud because Medace’s working model represents what we’ve worked so hard on from the start: connecting communities and uniting researchers and entrepreneurs from all backgrounds and disciplines. More often than not, these worlds never used to come into close contact. But at InSciTe, they work together physically and exchange knowledge in our biomedical facility. It’s great to see how the extraordinary collaborations – something we’ve been huge advocates of – have now become a matter of course.’

Find more background information in the interview with Emiel Staring and Danielle Curfs in InSciTe’s Year in Review 2019.

*co-funded by the European Regional Development Fund, the Ministry of Economic Affairs, and the Province of Limburg in the context of the Operational Program South Netherlands (OPZuid)